The Audi Q7 is the ultimate expression of quattro. The Q7 will make its market debut in 2006,

Not for the first time, Audi establishes a new class of vehicle - with the Audi Q7, the third generation premium SUV. The Q7 combines the qualities of a classic sport utility vehicle(SUV) - robust design, high seating position, off-road capability, functionality - with the uncompromising standards of the Audi marque; greater driving dynamics, more space plus enchanced luxury and comfort...all in the 2006 Audi Q7.

History of Audi - Four Rings
The Audi badge the 'Four Rings' is the emblem of one of the oldest car manufacturers in Germany. It symbolises the 1932 merger of the four independent motor-vehicle manufacturers: Audi, DKW, Horch and Wanderer. Together with the NSU brand, which joined in 1969, these companies are the roots of the present-day AUDI AG.

The Audi Q7 is coming!
In quattro's 25th anniversary year, Audi is raising the bar yet again, with the launch of the Audi Q7. The latest development of the quattro all-wheel drive principle, it will be unveiled at the 2005 Frankfurt Motor Show(IAA). The 3rd generation premium SUV from from Audi will make its market debut in 2006 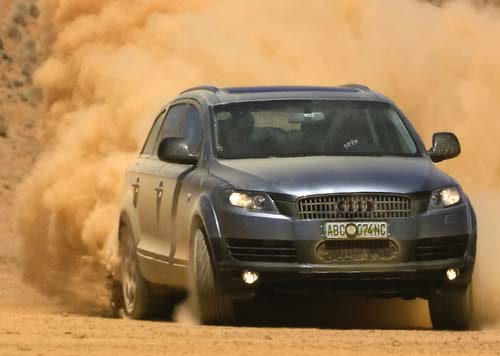 The new Audi sport utility vehicle (SUV) will bear the name Q7 when it goes on sale in 2006. This announcement was made at the Paris Motor Show by Prof. Dr. Martin Winterkorn, Chairman of the Board of Management of AUDI AG. "The letter Q denotes a new type family within our company, alongside A, S and RS. The 7 indicates that it is positioned between the A6 and A8," explained Prof. Winterkorn.

The Q7 will make its market debut at the start of 2006. The production version will be based on the Pikes Peak quattro concept study unveiled at the 2003 Detroit Motor Show. In common with the study, the five-door, seven-seater Q7 will combine the qualities of a fully-fledged off-road vehicle with the typical dynamism of an Audi high-performance sports saloon. The Audi SUV will moreover offer cabin space that sets new standards in its class.